-321 °F, 2021-2022, installation view (dark), part of -321 °F | in sarcophago vivum aeri
✺
Durational Sculpture
(part of the body of work -321 °F | in sarcophago vivum aeri)
2021-2022
40cm*30cm*60cm (Dimensions variable)
Seawater icicles (made from seawater transported from 133° 79.515 N 012° 90.797 E, an undisclosed, ‘nonexistent’ location at sea), microcrystalline wax, glass wax, dyed dark coloured seawater, crystal glass beaded chains, steel chains, stainless steel laboratory scissor jack stand, ABS, silver projectile replicas, double ocular loupe, sand and small stones caught in the steel structure of the IBC, stainless steel cable ropes, LED panel, SLS Nylon PA12, ballistic gelatine, electronic semiconductor refrigerator metal panels, recycled polypropylene nestable pallets (used in transporting the IBC water container filled with seawater from 133° 79.515 N  012° 90.797 E)
✺
-321 °F | in sarcophago vivum aeri: 133° 79.515 N  012° 90.797 E is a body of work catalysed by intermingling strands of real-life events reflective of the era of 2010~2200~∞. Centring on the lawsuits between Alcor Life Extension Foundation and Kurt Pilgeram (2015~2020)¹ and Essex lorry deaths incident (2019)², the work discusses how these two events may have trans-spatiotemporally informed each other in the parallel of their visceral, tragic aftermaths caused by cryopreservation³ and refrigeration. Engineered to preserve goods and human bodies for potential revival⁴ in a more technologically advanced era, cryopreservation and refrigeration in these cases ironically became what prematurely ended lives​​ or possibly deprived one of any chance of living another.
Exploring the liminal space between life and death, biotechnological processes, necropolitics, and collective diasporic experiences linked with my own peripatetic family history. The work reflects on the trajectories and struggles of bodies victimised by ideologies, in transgression, across systems of governance and bodies of water; aided, prostheticised, sabotaged, and/or eternalised by technologies and the technoscientific imaginary. It is dedicated to all the bodies that have been found and lost in the sea and beyond, the diasporic, and ‘us’.
The work features the condensation from the immaterial to material, from events to material evidence and vestiges, from the real to the parafictionalised, in a deranged crepuscular speculative homemade laboratory environment possibly belonged to an absent renegade scientist. The lab is perhaps set up to study the objects concocted from a mixture of sci fi canons, rhetorics of weaponisation (of ice/water), interfacing with neogothic lores, mythologies, and the biotechnological sublime, which underpins and mystifies the aforementioned strands and the entanglement among them.
133° 79.515 N  012° 90.797 E (stylised as 1̵̨̥͇͚̽͗́3̵̰̆̈3̵̥̝͈̤̙͕̈͋̀͛͝͝͝͝°̵̤̩̓̇ͅ ̷̲͛7̵͈̃9̵̗̳͔͕̮̻̟̓̈̀̕.̸̗̀̀̈́̐͆̈́͝5̷͇̰͇͉̗̝͑̿1̴̢̡̖͙̓͒͒́̒̎5̴͖͕̗͙̿̍̂̈̑́̈́̒̕͜ ̷̺̿̉͠N̶͉̗͚̍̀͗̀͝͝ ̴̧͉̝̽̊̓͐͠0̷̢̩̥̝̣͔̼̲͐̄͂͗͌1̸͕̈2̶̺̠͍͈͙͍̻͕̾̀̈͊̀°̵̘͗͋͂͛̅͒̌ͅ ̶̺͕̘̱̮̅̍͊̃͛̓9̸̨̩̱͕̥͚̲̩̀̌̄͜͝͝0̴͇͍̲̰͇̩̪̆̍̽̌͝.̷͖͛̓͆͠7̸̡̬͓͎͛́̈͗̓̐͆͗̚9̸͍̦̍7̷̮̯̱͈͖̱̰̓͛͒͛̿̈́͘͘ ̵̢̬̗̣̥̻̭̙͙͋̏͌Ë̴̠̣͚̥̙̣͙́̽͋̑̈̎̌͊)
will be exhibited together with -321 °F and an arsenal of lethal weapons made from ice (frozen seawater) newly developed for this exhibition. As ice is unsuspected, 'transparent', and yet a deadly, untraceable weapon, and solidification is a requisite for its weaponisation, they act as an allusion to the processes of cryopreservation and the act of putting a stake through the heart in subjugating the Other in neogothic lores. The icicles would be suspended from the ceiling above a metal tray or wax container filled with dyed seawater and white wax remains of ceromancy floating on the water surface. The ice weapons would be showcased on portable electronic semiconductor refrigerator metal panels and gradually melt away. The ice pieces will be replenished every week throughout the duration of the exhibition. Paralleling the futility of bodies, the resistance against and the defence of them, the Sisyphean cycle of transportation and labour and the water cycle through installing, freezing, melting, disappearing and reinstalling would become part of the body of work. 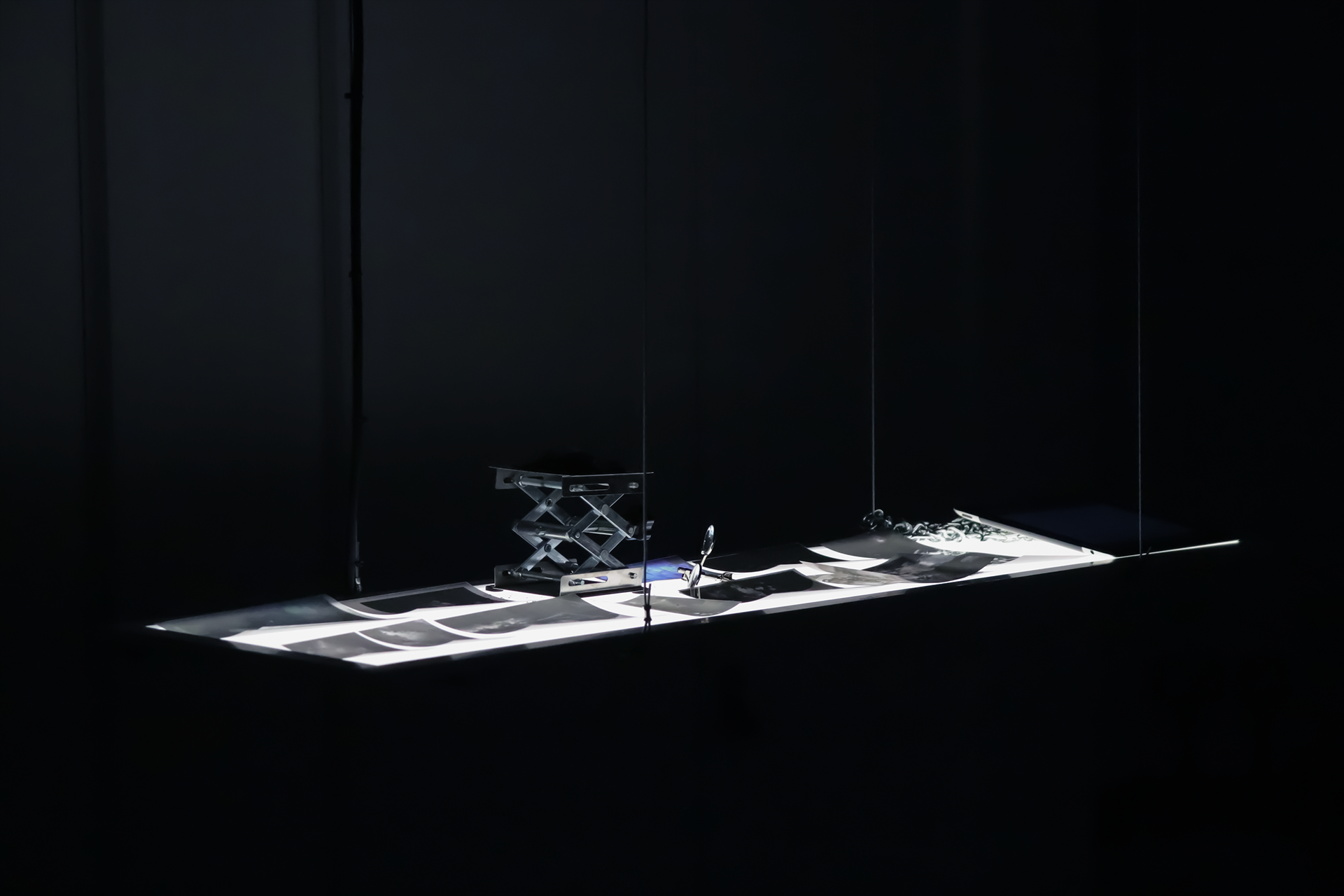 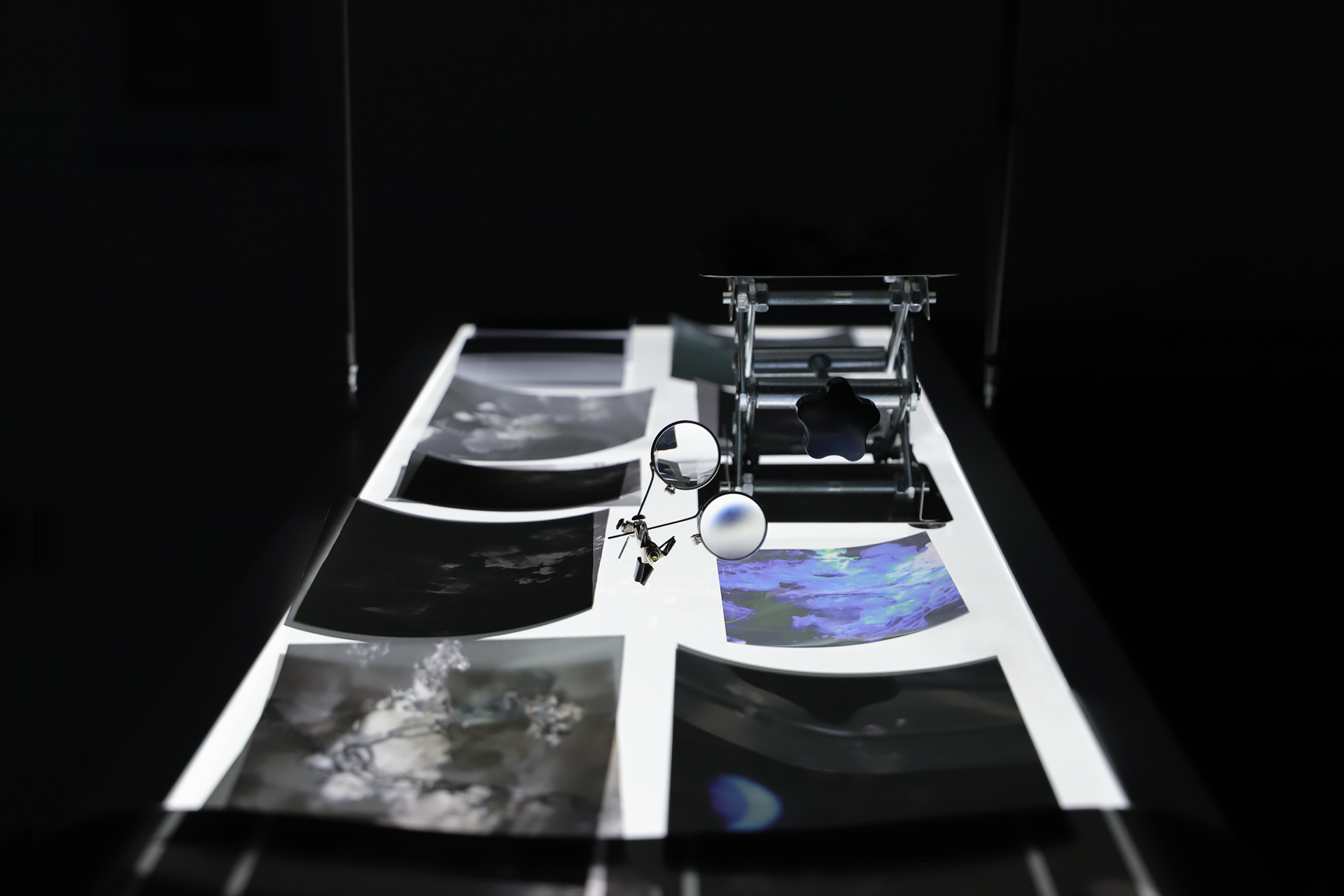 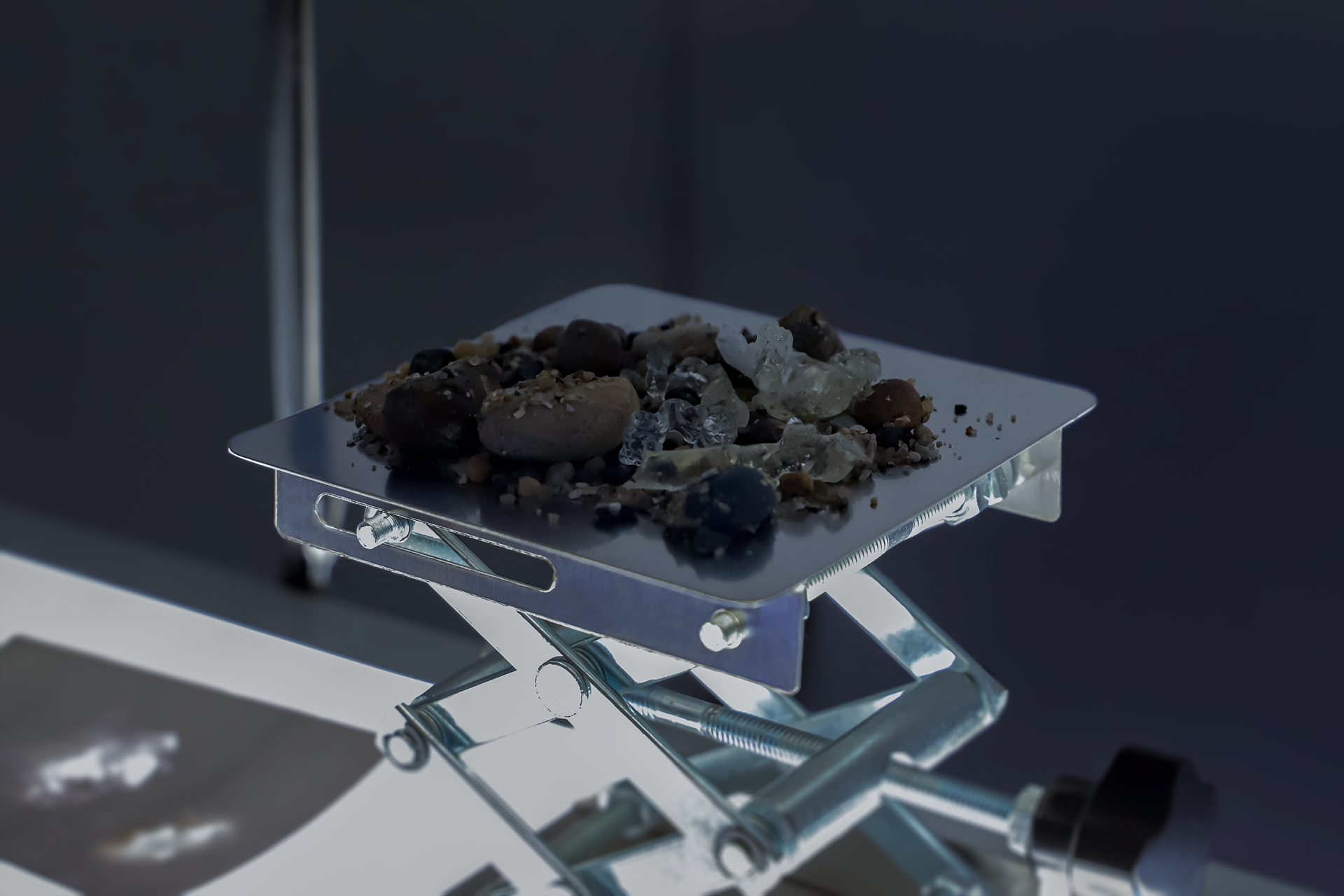 __________________
¹ Kurt Pilgeram’s father agreed to pay Alcor Life Extension Foundation a sum of 120,000 USD to cryogenically preserve his body at the temperature of -196 degrees Celsius (around -320.8 °F) in 1990 upon his death. His son, however, was stunned to receive his father’s ashes in 2015, listing that it was from the remnants of his father’s body from the shoulders down while his head remained preserved in nitrogen in Arizona. Kurt sued Alcor claiming extreme emotional distress and asked for 1 million USD in damages.
Updates on the Alcor v. Pilgeram case: 17CV05172 September 18, 2020. Trellis. https://trellis.law/ruling/17CV05172/Alcor-Life-Extension-Foundation-vs-Karl-E-Pilgeram-et-al/20200918c20645 October 23, 2020. https://trellis.law/ruling/17CV05172/Alcor-Life-Extension-Foundation-vs-Karl-E-Pilgeram-et-al/202010235184.
² In 2019, 39 Vietnamese people were found dead in the trailer of a refrigerator lorry in Grays, Essex. They were victims of illegal human trafficking and were sealed in the trailer when the lorry was being shipped from Belgium to the UK. Nine people in the UK have been so far convicted in relation to this tragedy with a further nineteen having been jailed in Belgium.
‘Irish Company Confirms It Leased Trailer Found in Essex’, RTE, 24 October 2019, https://www.rte.ie/news/world/2019/1024/1085287-migrant-deaths/; ‘Essex Lorry Deaths: Bodies of Victims Have All Been Identified’, BBC News, 7 November 2019, sec. Essex, https://www.bbc.com/news/uk-england-essex-50333559.
³ Shufaro, Yoel, and Joseph G. Schenker. "Cryopreservation of Human Genetic Material." Annals of the New York Academy of Sciences 1205, no. 1 (2010): 220-24. ‘What Does Cryopreservation Do to Human Bodies?’, BBC News, 18 November 2016, sec. Health, https://www.bbc.com/news/health-38019392.
⁴ John Bradford, ‘Torpor Inducing Transfer Habitat For Human Stasis To Mars | NASA’, NASA, 19 July 2013, https://www.nasa.gov/content/torpor-inducing-transfer-habitat-for-human-stasis-to-mars; Loura Hall, ‘Advancing Torpor Inducing Transfer Habitats for Human Stasis to Mars’, NASA, 10 May 2016, https://www.nasa.gov/feature/advancing-torpor-inducing-transfer-habitats-for-human-stasis-to-mars; Nordeen, Claire A, and Sandra L Martin. "Engineering Human Stasis for Long-Duration Spaceflight." Physiology (Bethesda, Md.) 34, no. 2 (2019): 101-111.